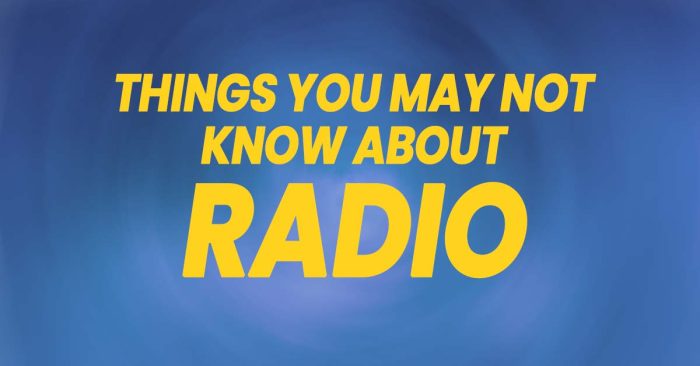 Radio, specifically broadcast radio, was invented by Italian Guglielmo Marconi in 1895 when he both sent and received a radio signal to himself. Contrary to popular belief, the first commercial took years to hit the airwaves. The first commercial radio station in the United States was Pittsburgh’s KDKA, which signed on in 1920, some quarter century later. KDKA’s call sign is in itself an anomaly as stations East of the Mississippi start with a “W” and those West of the Mississippi start with a “K”. Here are some other facts you may not know about radio.

AM Radio (Amplitude Modulated) and FM (Frequency Modulated) radio are its two basic choices. While AM radios have been in cars since the 1930s, it took until the early 70s for FM radios to gain popularity in cars. FM offers a clearer signal, and originally was host to classical and “underground” rock stations in its early days.

Radio Stations are Required to Keep a “Public Inspection File”

This file should contain the station’s license info, information about how it is addressing the needs of the community, how it posts jobs and other information about citizen concerns. Stations are required to make this info available to those who request it.

Those Annoying EAS Tests are Required

A follow-up to the old Emergency Broadcast System (EBS), EAS tests are required for broadcast radio stations. The required tests are initiated by large regional stations and outlets, and “trickle down” to small local stations. This is why some tests occur in the middle of programming, or your favorite song as you were singing.

Since radio has few borders, what you think may be a radio station in your city may actually be licensed to a nearby community. Radio station’s, however, must include the city of license in what is known as a “Legal ID” near the top of each hour.

More radio stations are being voice tracked than ever. This means your mid-day DJ may also be doing mid-days in two or three other communities. Their voices are recorded ahead of time and “tracked” between songs. Generally, you can tell if the announcer is live if they give the precise time of day and temperature during a broadcast.

While listening to actual physical radios may be down, we still enjoy radio through smart devices and internet streaming. Radio remains popular, particularly in the morning when many are still too busy to pay attention to TV or alternative choices.

Commercial radio in the United States is celebrating over 100 years of broadcasting, and in spite of reports of its imminent demise, it is still going strong.

Duct Tape: The All-Purpose, Don’t Leave Home Without it Product.

Fuel Your Business with a Blog

The Little Known Story of the First Japanese Super Car

You May Never View Your House the Same Again

Down on the Corner: America’s Business Barometer

The Three Ironies of Life Insurance

Factors Contributing to the Increase in Car Insurance Rates

The Value of a Property Manager